This edition of Forthright Radio from November 11, 2012 came up in conversation (12-11-17), so we thought it might be of interest to our web listeners, as well.

As the nights grow longer, and the season approaches of long winter naps, it seems like a good time to discuss one of the inevitable aspects of life – sleep. And this seemingly simple topic is not so simple for more and more people in the modern world. And it really is quite mysterious. Neither doctors nor scientists can even tell us what sleep IS, much less what natural sleep might be. And then, there are the effects of capitalism on sleep.

To discuss these things and more, we have with us Matthew Wolf-Meyer, who was (then) a Professor of Anthropology, at UC Santa Cruz. Matthew Wolf-Meyer received his Ph.D. from the Department of Anthropology at the University of Minnesota, specializing in medical anthropology, and the social study of science and technology. He holds previous degrees in Literature, Science Fiction Studies, and American Cultural Studies.

In January, 2016, he joined the faculty of the Anthropology Dept. at SUNY Binghamton. His work focuses on medicine, science and media in the United States to make sense of major modern-era shifts in the expert practices of science and medicine and popular representations of health.    His book The Slumbering Masses: Sleep, Medicine and Modern American Life, published by The University of Minnesota Press, was the first book-length social scientific study of sleep in the United States and won the New Millennium book prize in 2013. It offers insights into the complex lived realities of disorderly sleepers, the long history of sleep science, and the global impacts of the exportation of American sleep. 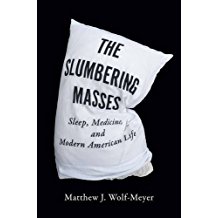