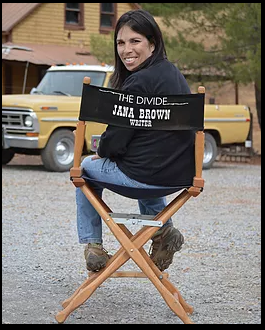 Jana Brown is the award winning writer of The Divide. She spoke with us on May 7, 2019, about the upcoming screening on opening night of the BZN International Film Festival on June 6 in the Emerson’s Crawford Theater.

The Divide is a story about the drama of ordinary life, following Sam Kincaid, who is suffering from the onset of dementia in 1976, when Alzheimer’s did not yet have a formal name. Sam is supported by an unlikely ally in migrant ranch hand Luke, who summons Sam’s estranged daughter, Sarah, to help with Sam’s growing memory lapses. The film is set in one of the worst droughts in California history, a plight that mirrors the dry patches in the characters’ lives.

Jana Brown and actor/director, Perry King, whose make-up regime was to rub dirt from is pick-up truck on his face, partnered to create The Divide.