BRYAN STEVENSON is the executive director of the Equal Justice Initiative in Montgomery, Alabama, and a professor of law at New York University School of Law. He has won relief for dozens of condemned prisoners, argued five times before the US Supreme Court , and won national acclaim for his work challenging bias against the poor and people of color. He has received numerous awards, including the MacArthur Foundation “Genius” Grant.

He will be delivering the Convocation Speech to the incoming Freshman Class at MSU Bozeman on August 24, 2017.

Great-grandson of slaves, he attended “colored” schools. As a young attorney, he created The Equal Justice Initiative to address the hierarchies of inequality in the criminal justice system. He says, “America is a post-genocide society.” “The great evil of American slavery was not the involuntary servitude and forced labor, the great evil was how we created this ideology of white supremacy.”

Marc Bekoff is professor emeritus of Ecology and Evolutionary Biology at the University of Colorado, Boulder, and co-founder with Jane Goodall of Ethologists for the Ethical Treatment of Animals. He has published more than 1000 essays (popular, scientific, and book chapters), 30 books, and has edited three encyclopedias. His latest book is THE ANIMALS’ AGENDA: FREEDOM, COMPASSION AND COEXISTENCE IN THE HUMAN AGE, co-written with Jessica Pierce, and published by Beacon Press (2017). http://www.beacon.org/The-Animals-Agenda-P1250.aspx

This interview was prompted by his recent interview with Brooks Fahy of  Predator Defense (predatordefense.org), whose investigative work exposes shocking activity at the US Dept of Agriculture, as well as the complicity of wildlife organizations, such as Defenders of Wildlife and The Humane Society of the US, in the “Administrative Removal”, i.e. killing, of wolves in national forests.

There is a separate posting for our full interview with only Professor Bekoff  and more specific citations referenced here:

THE PROFANITY PEAK PACK: SET UP & SOLD OUT 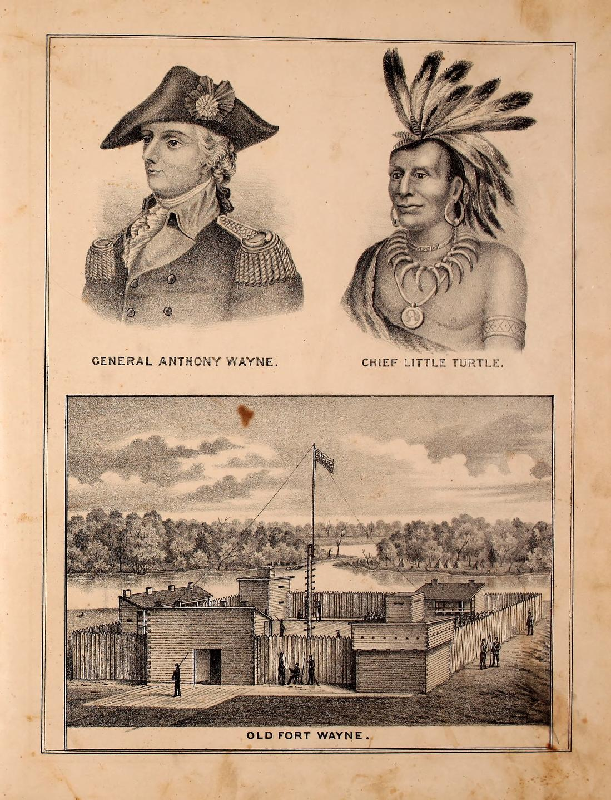 William Hogeland has written about the American Revolution era in three previous books, THE WHISKEY REBELLION, DECLARATION, AND FOUNDING FINANCE. His latest book, THE AUTUMN OF THE BLACK SNAKE: THE CREATION OF THE U.S. ARMY AND THE INVASION THAT OPENED THE WEST, published by Farrar, Strouse, Giroux in 2017, goes in depth into the history surrounding the American Revolution, and particularly a major defeat of the new United States, in fact the greatest defeat effected by North American indigenous peoples in the history of this continent. But few have heard about it, much less the individuals who made it happen. William Hogeland, is determined to remedy this.

First a bit of history:  On this date, July 19th, in 1848, the Seneca Falls Convention was convened. It was the first women’s rights convention, eventually leading after more than 7 decades to, among other things, the 19th Amendment granting women’s right to vote in the U.S. 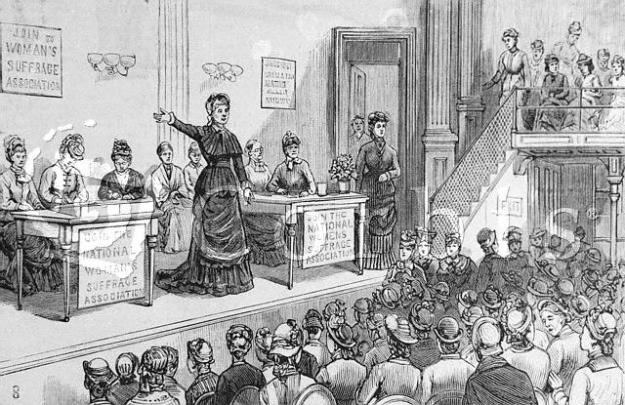 And on July 19th 1692, 8 people were found guilty of witchcraft and hanged in Salem, Mass., including Rev. George Burroughs, the only minister to be executed.

But now, we’ll fast forward a hundred years to “more enlightened times,” when the American Revolution had been won, and the power elites of that era were looking West across the Appalachian Mountains to so-called “vacant lands” for speculation and expansion. With only one problem, that being the people who had been living there for millennia didn’t agree that it was vacant.

A young George Washington explored, surveyed and speculated in lands west of the Appalachians, in the process becoming one of the causes of the Seven Years War – the first global war, causing over a million casualties – and also enhancing his own career and making his fortune.
The tobacco export business required ever more new lands for planting, due to severe, rapid depletion of the soil, hence the lust for more and more new land to plant.

Thomas Jefferson provided an evolving legal theory of Free Holding, dating back to the Anglo Saxon invasion of England, and disavowing the right of kings to grant tenure of lands, which had begun with the Norman Invasion. He believed anyone could take and hold any land without the permission of a sovereign, i.e Direct Ownership, as long as it was “vacant” .

His advice to farmers concerning tobacco’s soil depletion: “Better to move than manure.” 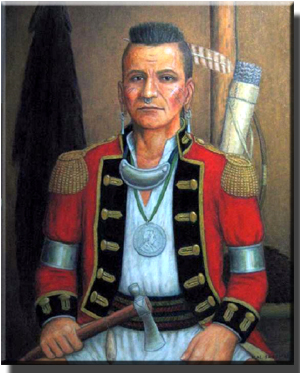 Unlike Blue Jacket, Little Turtle believed that without British armaments, the Americans could not be decisively defeated. His efforts to procure them were unsuccessful.

Joseph Brant, a member of the Six Nation Iroquois Confederacy tried to be a diplomat and go-between among the warring factions – American, Indian and British. His efforts only resulted in ever diminishing trust and respect on all sides. 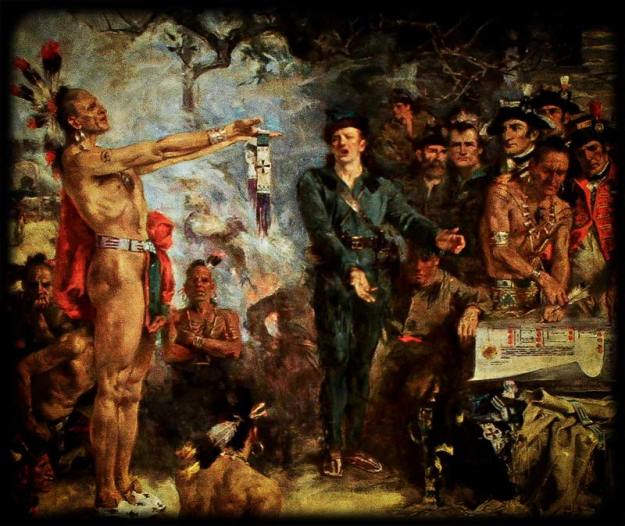 One treaty after another was made and broken by the Americans, although for the most part honored by the Indians. As westward encroachment increased – 10,000 immigrants coming down the Ohio River per month – war was inevitable. 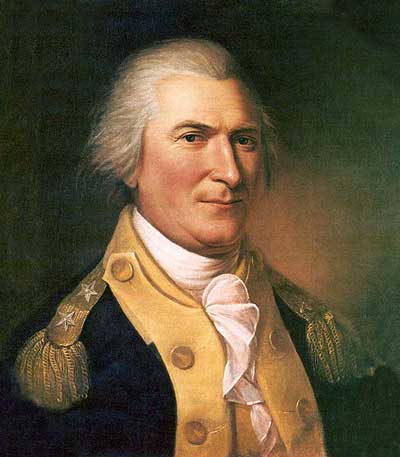 General Arthur St. Clair, who suffered the greatest defeat by Indians in U.S. history, when as many as 1,200 men, women and children – out of 1,500 – were killed, including most of the officers of the U.S. military.

St. Clair’s defeat by the Miami Indians at the Battle of the Wabash River Nov. 4, 1791.

Exact numbers are impossible to determine, but according to David Johnson in Fort Amanda – A Historical Redress (1790-1815):

Benjamin Madley is an historian of Native America, the United States, and genocide in world history. Born in Redding, California, Professor Madley spent much of his childhood in Karuk Country near the Oregon border, where he became interested in the relationship between colonizers and indigenous peoples. He writes about American Indians, as well as colonial genocides in Africa, Australia, and Europe, often applying a transnational and comparative approach. He is a professor of history at the University of CA at Los Angeles.  An American Genocide: The United States and the California Indian Catastrophe, 1846-1873 is his first book.  It is published by Yale University Press.  Professor Benjamin Madley, We welcome you to Forthright Radio.

The place we now call CA, was unknown to non-Indians until March 1543, when Spaniards first explored the coast, but it wasn’t until 226 years later, in 1769, that Spain sent soldiers and Franciscan missionaries north from Mexico to colonize it, to preempt British, Dutch and Russian expansion, and to protect northern Mexico’s silver mines.  At that time, there were about 310,000 native people living there, which seems small compared to California’s current population of almost 40 million, but he writes that it was actually the densest native population north of Mexico in North America. We began by discussing this pre-European CA population, and how they lived on the land.

The Mendocino Indian Reservation was a former Indian reservation in Mendocino County, of the early ones to be established (Spring, 1856) in California by the Federal Government for the resettlement of California Indians, near modern day Noyo, which was the home of the Pomo Tribe. Its area was 25,000 acres (100km²), but Yuki, Yokiah, Wappo, Salan Pomo, Kianamaras, Whilkut and others were forced off their ancestral lands and removed there.

The Mendocino Indian Reservation was discontinued in March 1866 and the land opened for settlement 3 years later.